Nothing Short of Full Abolition

On April 26 and May 3, Sister Lee McNeil and I testified alongside each other and legislative sponsors to abolish constitutional slavery in Colorado at the House and Senate State Affairs Committees respectively.  Concurrent Resolution 1002 unanimously passed these committees and also unanimously passed the subsequent floor voting in the House on May 1 and Senate on May 8.

Senator Crowder's (R) testimony is memorable for his passionate call to fellow Republicans to continue their long history of abolition, including the work of Abraham Lincoln, and vote "yes" to abolish constitutional slavery.  Now the voters have the same opportunity on ballot November 6.


Honored to be testifying this morning alongside Sister Lee McNeil of Shorter AME Church, whose great-grandmother was a slave, in favor of amending the Colorado State Constitution to remove the slavery exception as punishment for a crime - House Continuing Resolution HCR18-1002.
Read Resolution here: http://leg.colorado.gov/bills/hcr18-1002
Listen here: eg.colorado.gov/node/1349541
House State Affairs Committee proceedings begin at 9:30a. No telling what time we're up.
My testimony:
Good morning Representatives Foote and Lontine, and members of the committee.
I am Caitlin Trussell.
A Pastor of Augustana Lutheran Church, an 1,100 member congregation in Denver;
Faith Leader in Together Colorado, a multi-faith, multi-race organization;
the great-great granddaughter of Hugh Thompson, governor of South Carolina (1882-1886) and a graduate of The Citadel who led a battalion of Citadel cadets, firing the first shots of the Civil War against the Union ship 'Star of the West' as it entered Charleston Harbor;
and the great-great-great granddaughter of Thomas B. Clarkson, plantation owner of 300 slaves.
Complacency and justification are too easy when we ourselves are not the ones in chains. Prior to the Civil War and the burning of his plantation, my triple-great grandfather invited an abolitionist to come and see the condition of the slaves for himself. The abolitionist recorded his visit in a letter. The letter congratulated my triple-great grandfather on his good care of the slaves. He specified that they were clean, educated, and instructed in the Christian faith. I suppose it’s comforting that he treated his slaves with some kindness. Regardless, there's no legitimate excuse for owning people.

The odd thing is that I’d known for many years that he was a plantation owner and it never once occurred to me that he owned slaves. Of course I’m not responsible for his choices but I am affected by them…and so are all of us here. There is always something to be learned and another step to take. The legacy of slavery for all of us in this country, but especially for our Black brothers and sisters, is part of how I understand my call to the ministry of reconciliation in the second letter to the Corinthians in the Christian Bible -reconciliation understood as healing our broken relationships between God and neighbors.
My triple-great grandfather justified chattel slavery as a gentleman and a Christian. He had people around him at the time who knew it was wrong. He cozied up to something we clearly know was wrong. We’ve grown similarly cozy with the vestiges of chattel slavery including justifying constitutional slavery in our guiding document. I implore you to join me in abolishing the remnants of this inhumane evil by voting “yes” on the Concurrent Resolution to amend the Colorado State Constitution by removing the exception language as we continue to heal as a state and as a country. 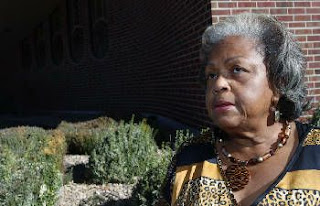 Posted by Caitlin Trussell at 7:07 AM