"Okay guys, listen to Navy Lieutenant Murphy's story while we wrap up with pigeon stretches." Our coach read us the details of how 29 year old LT Murphy lost his life in Afghanistan. [Click here to read it.]  His favorite CrossFit workout was renamed in his honor posthumously and more recently the Murphy workout became a Memorial Day tradition.

I'd never done it but it was my friend Susan's birthday so we teamed up to each do half.  Mine takes more mods to get through with ring rows and knee push-ups. Regardless, we did what we showed up to do.

Whether heading with my family over to the U.S. Marine Corps Memorial in Golden or showing up to do a Hero WOD, it's a good moment for me to pause in gratitude about the commitment that soldiers make on behalf of those of us who are not soldiers. I admit that I'm a sucker for homecoming reunion videos between soldiers and their families as well as the videos where soldiers talk about the freedoms they believe they are protecting.  The price they pay is ordinate for whatever benefit they receive.

I recently heard an NPR report about a cross-partisan group that has formed to support veterans in running for Congress [listen here].  Military Veteran politicians tend to favor diplomatic strategies over military intervention at higher numbers than their civilian counterparts. They know the cost of war at a deeply personal level.  I appreciate anyone working long hours to prevent the kinds of deaths experienced by LT Murphy, his fellow fallen soldiers, and their families.  Young people dying on my behalf in this way is overwhelming and humbling.  Young people dying in wars with fewer of the decision-making politicians ever having lived through or fought in one is questionable.

My larger family includes veterans (brother, stepfather, and father) and active duty military (cousin) but no one has died in active duty.  I'm open to conversations that honor the military and also challenge the institution to do better by the people affected by them.  That's consistent across institutions by the way - church, government, schools, banks, manufacturing, law enforcement, etc. It's pretty much consistent with my tradition's theology that we are simultaneously saint and sinner [simul iustus et peccator].

Today, though, I'm grateful for the young people who have given their lives for freedoms that I can so easily take for granted. 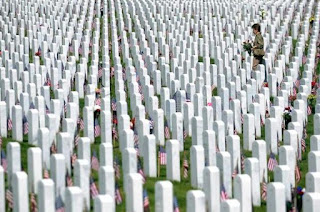 Posted by Caitlin Trussell at 11:33 AM