At the end of today, with the grand jury decision following Breonna Taylor's killing, here's the question on my mind. If I, Caitlin Trussell, middle-aged suburban White woman, had been shot to death in my bed at home by law enforcement who entered the wrong house after my husband jumped out of bed with a legally owned handgun to protect us, what would have happened?

Over the last three and a half months, I joined the other founders of Lakewood for Justice, Equity, Diversity, and Inclusion for weekly Black Lives Matter protests and demonstrations at different intersections in our town. While there were many positive honks, waves, and fists in the air from drivers, there was an escalating reaction primarily from older, White men. The reaction of lightening fast rage involved a straight arm, middle finger in the air, leaning toward the passenger window, making eye contact with me, and screaming obscenities at me. This happened to all of us at the protests - Black, Brown, and White. As a middle-aged White woman this was a new experience for me. Every time it happened, I envisioned the newspaper pictures of the White adults screaming at the black children entering schools as desegregation unfolded after Brown vs. Board of Education (1954).

There are so many reports of getting stopped by law enforcement pretty much doing anything while black, including sleeping in your apartment wrongly invaded by a no-knock raid and being shot to death to entering your own home and being asked to prove ownership. Here's a video of people being asked, "If you as a white person would be happy to receive the same treatment as black folks in our society, please stand."

It's illogical that people would even question that black lives haven't mattered and continue not to matter. It's not a question of being a nice person to the black people that we know or call friends. It's a question of holding law enforcement and other people in authority to the standard that White forks enjoy. I, as a former nurse and now pastor, am part of a professions held to the highest possible ethical standards. In nursing, people died if I wasn't. It's perfectly acceptable to hold law enforcement accountable. 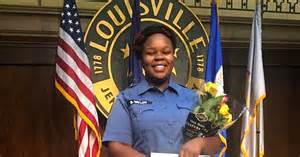 Posted by Caitlin Trussell at 7:40 PM