Colleagues, A Love Language All Its Own

Yesterday I followed a whole heap of colleagues in formal procession and full regalia into a colleague's funeral. Most of us had also just been surprised beforehand by the news of another colleague's sudden death the night before - both were in their 60s. As we filled the sanctuary aisle on our way to the pews, the image came to mind of police officers lining the streets when they say goodbye to one of their own. An imperfect metaphor but one that gets close to describing the shared connection of work in common. My colleagues so often hold space for other people's big moments of life and death. It was different to show up for each other in this way, a motley crew covering the spectrum of grief, love, and loss.

Last Thursday, I picked up a colleague who had flown in for the funeral. He said he was grateful to be able to be with his "team." His gratitude is a bit of what I mean when I use the word "colleague."  There's a lot of love in the word. My colleagues represent a variety of kinds of work in the church world and, in my experience, it's one of the weirder professions one can be called into. The weirdness is part of the love. There are things that we understand without words because of common experiences that defy description. Honestly? There is much among colleagues that mystifies me after only a few years in the mix as a second career person. I can also honestly say that I couldn't continue to do the work without them. It's a love language all its own. 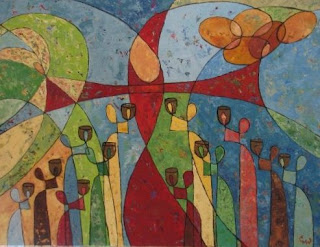 Posted by Caitlin Trussell at 12:56 PM