100% of the Colorado legislature, both houses and both parties, voted unanimously to place Amendment T on the ballot. Voting Yes on Amendment T removes the slavery exception from the Colorado State Constitution, Article II Section 26.  Right now, slavery is forbidden "except as a punishment for a crime..."


That’s right, there is full agreement among Republicans and Democrats to remove the slavery exception from the State Constitution. Now it is up to Colorado voters.  From my intermittent work at Denver Women's Correctional Facility, there is no doubt that offender work and training programs are necessary for self-worth and successful reentry into community.  However, there is unanimous agreement that the language of slavery is neither an acceptable starting point nor a Colorado value.

It will take 1.7 million Colorado votes to pass Amendment T.  I'm hopeful that voting "yes" will be a no-brainer for our state as the word spreads. 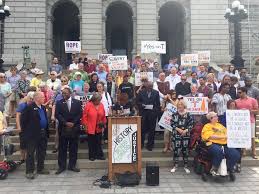 Posted by Caitlin Trussell at 5:14 AM