God's plan: Why it is by faith that do NOT invoke it...

Individual or collective experiences of violence shine a light on just how twisted people can be.  Recent events include Orlando, Charleston, Baylor University's sexual assault tolerance, Brock Turner rape crime, to name a few. Whether in the nightly news or during the pastoral care and counseling that I do, people often say some variation of the following comment, “I know that God has a plan.”  In pastoral care, there may or may not be a response in the moment to the comment depending on how the conversation goes and how reassuring this idea is to the person.  In the news during national crises, there's usually the token interview with a pastor who's willing to say that it's part of God's plan.

Here’s what I know for me: “God’s plan” is difficult to invoke for myself or anyone else after having a father die when he was 50 years old following his homelessness due to intractable schizophrenia. It's galling that anyone would claim that his suffering and the subsequent suffering of his family was randomly inflicted by God or in any way deserved. The way that I’ve come to terms with my father’s life, illness and death is through the cross.  And, when I say it that way, what I really mean is Jesus on the cross.

Hope is what I hear in the classic Bible verse often invoked regarding God’s plan:
For surely I know the plans I have for you, says the Lord, plans for your welfare and not for harm, to give you a future with hope.   (Jeremiah 29:11)  God’s plan is “for your welfare and not for harm.”  These words land in the paradox between God’s plan and a broken world – two things that are true at the same time and seem irreconcilable except for the cross in between them.

I hang onto the cross because God sunk into humanity in Jesus and was executed by the worst of what people can dish out. In this self-sacrifice, God did not raise a hand in violence against the very people who committed the violence. Rather, God redeemed into holiness what seems utterly unredeemable. But this isn't only about the grandiose, public violence that other people commit. It's also about the small acts of violence I commit in a million ways that hurts other people and myself. My complicity in systems of violence that breeds communities in which solo shooters are possible. God's holy work in me by way of the cross is the hope that I hang onto as those places of violence in me find redemption and new life. 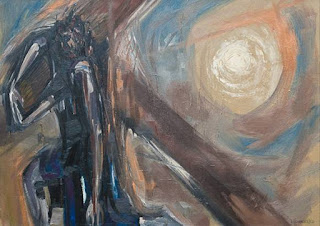 Posted by Caitlin Trussell at 7:27 AM